Rangers of the Earth

battered box addressed to a class of 10-11 year olds arrives unexpectedly in their classroom. Everyone watches as the teacher opens the box and pulls out a trash bin. A note attached to the lid challenges the group to answer a riddle before they look inside: “What is one thing you can’t throw away when you are finished with it”? The note is signed, “Ranger Rami.”

After working on the riddle for a few minutes, the lid is lifted to reveal the answer. Another letter is found inside along with a model Earth surrounded by rubbish. The teacher unpacks the trash bin and the students take some time to examine the trash and think about the energy and materials involved in each item and then what impact those items might be having on the models of several plants and animals hidden underneath. Soon each team of 2-3 youngsters reports its findings to the group. At the bottom of the trash bin there is a stack of Earth Ranger applications along with another letter from Ranger Rami, this one inviting them to a special training program to become Earth Rangers. A few days later, someone notices that a letter from another ranger has appeared on the trash bin. This letter, from Ranger Rain, presents a second riddle for the future Earth Rangers to think about as they start their training. 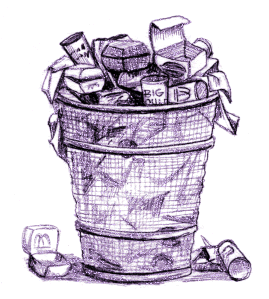 Upon arrival at the Rangers Training Camp, they are ushered into a dimly lit room where a large model of a trash bin containing a model of the Earth and overflowing with trash attracts their attention. A leader, identifying himself as a friend of the Rangers, steps forward to greet the group and then removes the model Earth perched in the trash bin to reveal a screen. A film projected on the screen takes them out into space to see where they really are in the universe. Afterwards, they are given a pouch containing a Secret Decoder Book, and a Ranger’s Notebook, then head out to learn their first secret of becoming an Earth Ranger.

During the rest of the day, the group goes on an “Earthwalk,” visits “Speck Trail Junction” to learn about cycling, spends time at their own “Magic Spots,” and figures out where the materials “specks” came from in some old lunch trash, prior to choosing one of their own habits to work on about how they use materials in their lives. Before heading back to school, the group returns to sit once again in front of the giant trash can model. The leader removes the large Earth model, but this time the film starts where they’d left off in outer space, and zooms back in to Earth. Afterwards the class is given a Rangers Roster to track their progress in becoming Earth Rangers throughout the year, and a training crate of materials to take back to school with them. 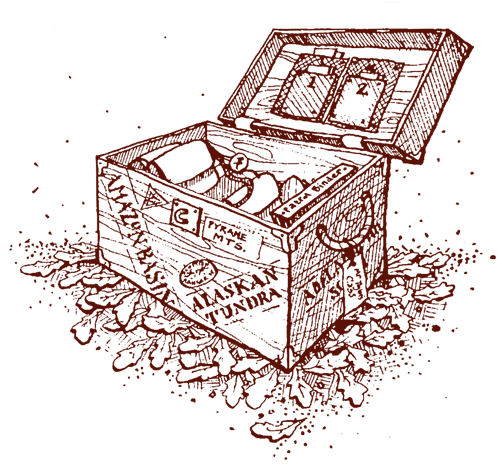 A couple weeks later, the teacher opens the crate to start Phase II of their training. Notes from the Rangers describe their next tasks. They examine the school supplies in their desks and come up with recommendations for improving the contents of “My Great Speck Container.” Individually, they also spend time finding and sitting at a “Magic Spot” in a natural area near home. And they borrow a Ranger’s Pouch and go “patrolling,” by themselves or with a small group, in a nearby natural area. Upon returning from patrol, each participant fills out a Patrol Report, and adds it to the group’s map of the area.

During this time, the students return their signed parent letters indicating they successfully kept their new materials habit for at least four weeks. These letters are sent back to the “Rangers” and the youngsters who completed Phase I of their training receive a special sticker to be placed in their Ranger’s Notebooks.

During their second trip to the Rangers Training Camp for Phase III of their training, the participants visit “Mama Nature’s Munchroom” and find evidence of munching despite the snow on the ground. They revisit their “Magic Spot,” meet a “Connector Inspector” who connects them to the web of life, and find some “Time Capsules” holding evidence of what happened there in the past. In addition, the leader takes them to an “Immersing Place” where they get some practice in thinking about how to help people feel immersed in a natural area. 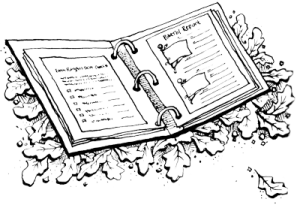 Back at school, the teacher illustrates a story for them about their own use of energy, and asks each student to choose an energy habit to work on at home. After keeping their new energy habits for a month, they receive their Phase III stickers. Not long after, a crate once again arrives in the classroom. Inside, notes from the Rangers once again direct them to another set of tasks for Phase IV of their training. They create “Energy Diagrams” of the energy they use at home, write and act out “Interrelationships Plays,” and fill in a “Change Album.” They also go out on patrol again and create “Patrol Exhibits” to share their experiences with others.

After a month or so, everyone completes Phase IV and the Patrol Reports are packed up and sent back again. The Phase IV stickers soon arrive by mail for those who have completed their tasks.

The Ranger letter that introduces Phase V asks the students to think about environmental problems they have observed, and then use special “SCORE” sheets to describe a problem, figure out the necessary steps to correct it, and take action. Their class turns out to be very interested in the specks contained in the materials they use every day in school and decides to create a list of more environmentally-friendly supplies to guide the incoming students next year.

The year is brought to a close with a visit from a Training Camp leader who lifts another trash bin out of a box she brought with her. After one final riddle, she passes out Phase V stickers and official Earth Rangers identity cards to everyone who earned them, and explains how to register at the nearest Ranger Station and continue helping look after a special natural area.