he Earthkeepers program is designed for 10-11 year olds. It is an unusual learning adventure that helps participants build understandings of ecological concepts, develop environmental feelings, and undertake personal actions to lessen their impact on and increase their contact with the natural world. The program begins with a 2 1/2 day springboard experience that sets the stage for the remainder of the program back at home and school.

Earthkeepers begins with a letter from a mysterious character named E.M., who invites the young people to come to an Earthkeepers Training Centre and become Earthkeepers. An accompanying “hobbit-style” map with intriguing hints of adventures sparks lots of interest. The anticipation pays off when they arrive a few weeks later and get ready to head into “E.M.’s Lab.” A brief look is all they are allowed, since only those who know the “secrets of the keys” are supposed to enter. It is fairly dark inside, but the light of an oil lamp on a small wooden desk illuminates the den of a nature lover. There are shelves full of nature books, rocks and bones, feathers and shells – the detritus of a lifetime of exploration – plus a walking stick and an old rocking chair. Once inside, the sound of crickets is heard as a window shade lowers, apparently on its own. A picture of the door to E.M.’s Lab appears on the shade, and a voice welcomes the young people to the Training Center, followed by a special audio-visual presentation explaining the process of becoming an Earthkeeper. 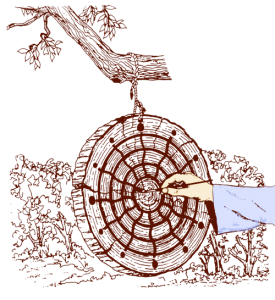 There are four KEYS that will have to be earned – Knowledge, Experience, Yourself, and Sharing – in order to unlock the secret meanings of E.M. After leaving E.M.’s Lab, the young people receive their Training Manuals and start right away to earn their K key. First, they visit “Mama Nature’s Munchroom” to become “Munch Line Monitors.” Following the I–A–A learning model (Inform-Assimilate-Apply), the participants begin with a reading in their Training Manual. Next, they use“Munch Trays” to collect evidence of sun-munchers (plants), plant-munchers (herbivores), and animal-munchers (carnivores), and discover that it takes many sun-munchers to feed a smaller number of plant-munchers and many of those to feed an even smaller number of animal-munchers. Finally, “Munch Bags” containing evidence of different munchers are analyzed. Participants sort through the evidence, trying to reconstruct munch lines (food chains). They quickly discover that things are more complicated than they seem. A plant or animal is really part of many munch lines. After learning how “munch line monitors” can look out for “munch lines” in trouble, each participant finds an example of a munch line nearby to draw and explain in the Training Manual. Three more “Conceptual Encounters,” focusing on cycles, interrelationships, and change complete the Knowledge portion of the program. The E key for Experience also includes four activities. One that is repeated every day is “Magic Spots.” Each participant finds a place outdoors to sit alone in direct contact with the flow of life. While their Earthkeeper Diaries can be used to record their thoughts, most of the time is spent observing quietly. Sitting still for twenty to thirty minutes seems a bit overwhelming for the participants at first, but it almost always becomes the favorite activity in the program. The second E activity is an “Earthwalk,” where they use all of their senses to explore a natural area. For the third part of earning the E key, the participants borrow “E.M.’s Diary” and use it to recreate a special walk E.M. took one day. The final E activity, engages the participants in being both the actors and the audience in a play to recreate the sounds, smells, and touches for each other from a day in this season in this place. In addition to the attraction inherent in figuring out the identity of the mysterious character E.M., earning their keys represents both another “hooker” and an “organizer” for the learning taking place. On the first evening, just after dark, while everyone is working on posters about the program that will be taken back to the classroom or meeting place to serve as a reminder of their experiences, small groups of participants are asked to step outside to help gather some materials. To their surprise, they have really been taken out to receive their K keys. Using a candle lantern, the participants are sent a short way down a path, where they find an old box stenciled with the letter K. The K keys which they have earned unlock the box revealing the first secret: E.M. means Energy and Materials. The E key is given out the second evening at the centre and used to open the E box in E.M.’s Lab to reveal the second secret meaning of E.M. 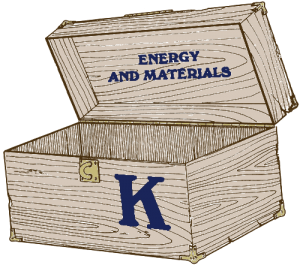 After earning the K and E keys, the participants become Apprentice Earthkeepers and practice being Earthkeepers in order to earn the last two keys back at home. To earn the Y and S keys, participants select individual tasks to accomplish. For the Y key (Yourself), they must lessen their impact on Earth by using less energy and fewer materials long enough to form new habits (at least one month) and deepen their feelings for the planet by spending time in natural places and recording their experiences. For the S key (Sharing), the participants share their knowledge and experiences with others in their family or neighborhood. Keys are given out each time and the boxes opened in the school or meeting place to reveal the last two secret meanings of E.M. The apprentices are now Level I Earthkeepers, determined to keep on lessening their impact, deepening their feelings, and sharing their knowledge and experiences.