magine leading a small group of adults in silence on a summer’s eve to the edge of a nearby meadow. You are carrying a candle lantern to light the way, and after settling in to enjoy the view as the planet turns away from the sun, you pass through the group pouring a small cup of plum wine for each participant. 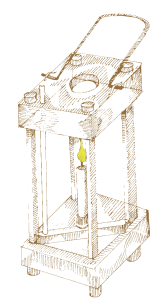 Although everyone is alone with his or her own thoughts about the softly changing scene before them, they feel a silent sharing with the others at the same time. This is a Viewing Party.   We borrowed the idea of a Viewing Party years ago from the Japanese tradition of appreciating the ephemeral beauty of nature. In earlier times, they would invite guests for a special “viewing” of a single flower reaching the peak of its bloom, or perhaps a tree losing its blossoms. Sometimes they placed moon-viewing platforms in their gardens where they would go on special nights to just sit and watch the moon. One of my favorite parties occurred on an evening in late summer when all the guests brought small bamboo cages of winged insects. At the height of the party everyone would let the insects go at the same time, then listen to the sound they made whirring away in the night air. In the past, the Japanese would not have held a Viewing Party in silence, but they did not feel the need that we do today to fill any void with human chatter. Silence opens the door of human perception and invites us to take in more of what’s around us. A Viewing Party is an invitation to introspective contemplation of the larger world we share.

Before you begin, explain to your group what a Viewing Party hopes to accomplish, and go over the entire order of events very carefully. (It helps to repeat your key points a couple of times.)  Emphasize that the focus is on the subtleties of the view. For a nighttime experience that might include the silhouettes of trees, the texture of the land, the shades of black, the sounds and smells on the night air, perhaps the reflected sunlight bouncing off the moon and reflected again by water or stone. 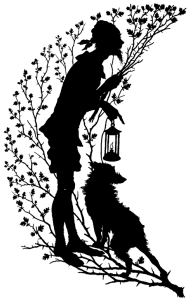 Many people in our contemporary western societies are so over-stimulated that if a plane doesn’t fly over at the peak of such an event, with someone parachuting out twirling sparklers, they’re likely to respond: “That wasn’t much.” So be sure to set the expectation that what you are going to view at night is not the shooting stars, nor the lights of the city, but the natural world as it turns away from the sun.

Of course, Viewing Parties don’t have to be held just at night or just in fair weather. One of my most memorable experiences took place in mid-afternoon on the edge of a bluff overlooking the prairie in Manitoba. Although we didn’t carry a candle lantern, everything else was exactly the same, and we settled in to view the patterns the wind made as it blew across the grasses from as far away as the eye could see.

Be sure to emphasize also that our Viewing Parties are held in total silence, and that the lighting of the old candle lantern signals the beginning of the silent time. Point out that people should also sit up at the party. When you lie down, you’re in more of a passive mode, and we want to be sure they can actively engage with the flow of life around them. Describe the plum wine you will be serving by saying that we’ve also borrowed a little something extra from the Japanese, something we think adds a nice touch to the experience. Make sure they understand they will only be getting a small amount, just enough to sip, and explain that if people don’t want to share the wine, that’s fine, they can just wave a hand when you come by, and you’ll pass on. In any event, they can still enjoy the wine’s fragrant bouquet on the night air. 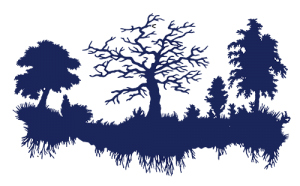 Finally, conclude your explanation by asking everyone in your group to meet you outside after a short break (be sure everyone dresses for the weather and include “sit-upons” for them).

After you have met the group and lit the candle lantern, ask everyone to line up behind it. It’s important to line them up carefully, single file, before you begin. (Go down the line touching the participants and counting them off. This way you make sure you have their attention; you physically establish a single line, thus eliminating conversation between pairs; and you check your numbers so you don’t leave someone behind.) Explain that you will set a slow pace and ask the participants to walk very carefully, always stepping just behind the person in front of them. When you reach the spot you have selected beforehand, motion people off to one side of you forming a “gallery” of viewers. They should all be facing the same direction, and they should sit fairly close to one another — not touching one another, but close enough that they can feel the silent sharing of the view.  (They will probably spread out naturally a few feet apart.) Blow out the candle lantern and settle in yourself for a few minutes. After everyone has had a chance to begin absorbing the view, bring out the plum wine and start your rounds, pouring each person a small amount (about an ounce) in his or her special cup.

When you’ve completed the serving of the wine, return to your seat and settle back in again to enjoy the experience yourself. Allow about 15-20 more minutes of viewing time, then re-light the candle lantern and stand up as the signal for departure. Walk away very slowly, allowing plenty of time for everyone to line up again behind you as you prepare to return.

When you’ve arrived back at your starting point, step aside and quietly say goodnight to each person as he or she walks by. This breaks the silence and adds a nice personal touch to the end of a magical experience.