n “Earthwalk” is a light, refreshing touch of nature that aims to develop the successive feelings of joy, kinship, reverence, and love for this incredible planet we share and its amazing natural systems and communities of life. Earthwalks are one of ten categories of activities developed by The Institute for Earth Education for building comprehensive ecological learning and “feeling” programs, but many outdoor leaders around the world use them primarily for introducing people to a natural area in a non-identifying, non-discussing, non-threatening way.

They have become one of the great success stories in structured nature experiences during the past 50 years.   Earthwalks last about 45-75 minutes. When less than 45 minutes long, the separate activities do not meld together into a whole, and after 75 minutes, it’s difficult to maintain the structure that generates their synergy. Only about 4-6 activities are needed for most Earthwalks, and there are many activities to choose from in putting one together.   Earthwalks vary in their depth and intensity depending on the make-up of their participants. They work best with those from about 9-90 years old. Outside those ages, physical limitations may make some activities less successful, while the whole experience doesn’t come together as intended. A good size for a walk is about 15-20 participants, but it’s possible to accommodate more, again depending on the age and experience of the participants, plus the individual activities selected.

Neither Nature Walks nor Nature Games 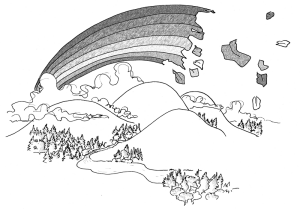 Traditional nature walks tend to be “follow-me, gather-round” show-and-tell experiences of place emphasizing the identification and make-up of its most notable characteristics. An Earthwalk is a “share and do” experience of place, emphasizing a sensory grasp of its characteristics, and an emotional response to them. In this sense, an Earthwalk is a journey into our feelings for nature. Many teachers and leaders are reluctant to take groups outside because they fear they don’t know enough about nature to be comfortable there. But Earthwalk leaders don’t need to “know” a lot about nature in the usual sense. They just need to be enthusiastic in using their own senses to explore its diversity and appreciate its beauty. Earth educators believe that leaders should not be intimidated because they don’t know something’s proper name, for example; they should be intimidated if they can’t find something interesting just by examining it. That’s a far more serious shortcoming.   An Earthwalk leader is not trying to explain what’s there, but trying to help people sense it more richly and share their feelings for it, as a way of bringing those feelings to the surface and reinforcing them. Above all, we don’t want people to feel nature is an array of names and numbers with little relevance to their lives; it is a world of sensory delight, populated by their “fellow passengers” on this wondrous vessel in space. The institute has created other “vehicles” for building ecological understandings of how these passengers work together, but in an Earthwalk, the pieces of life are important primarily as a reflection of the space being explored, for it’s the whole we hope will captivate and touch participants in profound ways. Please note: Even though an Earthwalk is meant to be playful, it’s not a series of little games. A game is a recreational activity, usually with rules. Earthwalks are put together with learning outcomes in mind, serving the mission of both education and place. They have structure and purpose that take them beyond the category of a purely leisure pursuit. 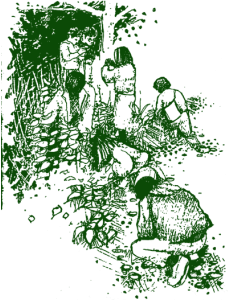 Everyone in the field seems to be talking these days about “reaching young people,” but they often get the sequence the wrong way around. The underlying assumption is that any contact with nature is good, but the problem is, it may not be good enough. In fact, chances are good, it is not. All those kids who grew up more in touch with nature a generation or two ago are the same ones having such heinous impact on it today. Lots of today’s renewed attempts have made their means their ends. Forts and treehouses, rites of passage, storytelling, wilderness experiences, survival skills, etc. provide a framework perhaps, and a sense of adventure, but in our field their environmental outcomes are often not where someone began in designing them, so they end up without a carefully-crafted program to achieve particular ends. Does that mean these throw-backs from an earlier era have no value? No, of course not, but neither does it mean that they are providing a serious educational response to our environmental problems. We thought that was the task. Leaders in our field today write about such unstructured, serendipitous nature outings in glowing terms, but conveniently overlook all the damage that was done. Yes, kids learned how to make “natural tools,” but they often used such sharpened sticks, and their bb guns, to kill things. Yes, they made forts, and then used them to wage war on their neighbors. In reality, it was preparing them for Wall Street, not Sustainability Street. Yes, some youngsters, like John Muir, moved beyond this phase (or escaped it) and became life-long environmentalists. But most did not.

Surely the environmental destruction of the US bears witness to this fact. Do people think that the American Eden was destroyed by a bunch of aliens from another planet? No, its continuous destruction in our lifetime has been at the hands of all those kids messing around in nature who didn’t know what they were doing, and still don’t. Where do people think all the anti-environmentalists, climate-change deniers, private property obsessives, etc. come from? Kids who didn’t get to build forts?   As for “child-centered learning,” the other “theory” in vogue these days, it has been around for a very long time, but it is most often followed now in the breech. It does not mean the leader does whatever a child wants to do, when he or she wants to do it. That’s not child-centered learning; that’s abrogating your responsibility as an educator. Current programs based on such a warped version of the theory often turn out to be highly manipulative (even when subtly done), but never admit to being so. If we are serious about educating people to live more lightly on the planet, why not ditch the misleading hype and get on with the job of doing it in a carefully-crafted, focused, sequential way?   We think we pay a lot of attention to the child in the activities we design, but child-centered learning doesn’t mean you ask the child to provide the design. As John Dewey expressed it a hundred years ago: “The teacher designs and facilitates activities that lead to meaningful experience.” That’s what we do. We don’t ask the child to design them. However, we certainly base them on what will appeal to the child, and what the child can grasp at a particular age. JK Rowling didn’t create something based on the transitory interests of today’s youngsters; she crafted an entire world based on universal, timeless motivators (and JR Tolkien did the same for adults). We have tried to do something similar for learning about the planet and its natural systems and communities. Feeble attempts in comparison, but our intent has been honest. We don’t suggest that the child should create the narrative arc.

The activities in an Earthwalk are connected to both the setting of the walk and to each other. They are not just conducted and discarded one after another as separate pieces. The point or intent of each is applied repeatedly to the natural area being introduced as the walk progresses. This gives an Earthwalk continuity and coherence as a special way of experiencing and sharing the natural world. But it is not a substitute for a carefully-crafted program regarding our relationship with the planet and its natural systems and communities. For us, it is an introduction to something much larger. An Earthwalk is a way of introducing a natural place based on one’s interactions with what’s there in a sequential arrangement of interlocking activities. 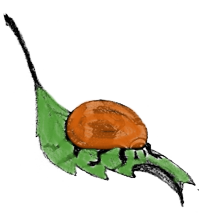 It’s a whole experience, with a definite opening and closing. It flows step-by-step in a predetermined way, encouraging its participants to interact more fully with the natural elements around them. In our work, an Earthwalk is the prelude for what’s coming in an overall program. We hope that those who lead Earthwalks will use them as a way of introducing their participants to natural places in a fresh way, and provide opportunities for them to build on their experience. Of course, one or two Earthwalk activities can spice up any outing, be it on the school grounds or in a park, but people can’t learn to swim by splashing their feet in the water. At some point, they have to get in the pool. Five or six of these activities, put together in a smooth, flowing way “off the trail” will do a lot more than one or two on the lawn. For an experienced earth educator, this goes without saying, but it’s surprising how many outdoor leaders want to add some spice to their labeling and quizzing sessions by including a one-off Earthwalk activity. It’s as if they don’t grasp that when it comes to the feelings, the spice should be their substance.