he Institute for Earth Education (IEE) was formed in the US (1974) as a functional vehicle for the enthusiasm generated by the ideas in Acclimatization and Acclimatizing, developed by Steve Van Matre and a dedicated group of holiday camp counselors in the 60’s. They realized that the typical “follow-me, ‘gather round” approach of traditional nature study was not working as a means to turn youngsters on to the natural world. (Nature study at camp had become rather dull and passive, an hour of identifying, collecting, and dissecting sandwiched between more exciting activities such as riding and sailing.) The strength of that enthusiasm, particularly evident in the workshops begun in the 70’s, and the response to an article on the work in National Geographic, “In Touch With Nature,” indicated the need for a more formal group to continue with the development and implementation of programs based upon the Acclimatization vision.   The first result of that effort was a carefully crafted five-day program for 10-11 year olds on “getting to know your place in space,” Sunship Earth (1979). It was followed over the years by Earthkeepers (1987), SUNSHIP III (1997), and Rangers of the Earth (2005), all accomplished with no major foundation grants, no government funding, and no corporate sponsors, relying instead on members’ contributions, materials sales, workshop fees, and lots of volunteer help.

In the 80’s, the work spread to other countries as outdoor leaders discovered this fresh way of introducing people of all ages to the natural world and its ecological systems and communities. The institute’s emphasis on building structured programs based on key ecological concepts challenged nature and outdoor educators to do more. And many practitioners responded. As the institute’s orientation and participation broadened, the decision was made to open up both the organization and its process for designing and developing programs. The focus would shift to the hardware – the structuring of the educational programs – in order to help teachers and outdoor leaders create their own software. The reality was that although the institute could provide model programs, it could not provide enough of them (nor fast enough) to meet the needs of all the various settings and situations in which people found themselves. Earth Education…a New Beginning (1990) laid out the template and tools for people to create their own programs. At the same time, the institute adopted a tree for its structural symbol and decided to facilitate the creation of formal “Branches” in other countries.

In the 90’s, the institute became the largest international organization for educators in the environmental movement. It had pioneered (and popularized) a number of major thrusts in educating people about their relationship with the planet, and continued to refine and polish those efforts, while coming up with new material at the same time. Although others in the field had contributed to these “ways” of educating and organizing, the institute put them together in a cohesive whole and made them available on an international scale.

using solitude experiences as regular, integral parts of a program

establishing an international series of training courses and conferences

developing a worldwide network of program leaders and educators

A School for a School 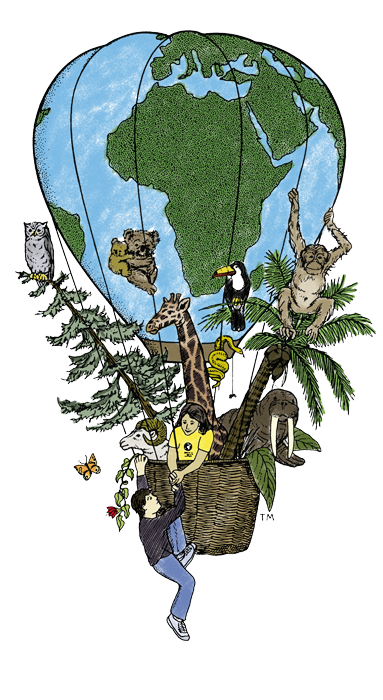 Unfortunately, over the years, many people had also come to see earth education as a brand instead of an instructional strategy. In the institute, we always viewed the work in a different light – not as a brand or “approach,” but as a “school of thought” about how to change people’s relationship with the planet. The institute’s body of work consistently rejected the prevailing “wisdom” for how we should address the planet’s environmental problems, and its methods continually challenged the field’s popular leadership style of “follow-me, gather round,” while quizzing the participants and labeling the pieces of life for them. The institute had a distinct vision, and fortunately, it found just enough people in the world who shared it in order to perpetuate that vision and build upon it over the years.   After much contemplation, we elected to broaden the institute’s public image by doing more to train others not only in what we do, but how we do it. Our school of thought needed a school of its own – a way of reaching more people with our underlying principles, not just our programs and activities. Out of this decision came the concept for a School of the Earth, destined to become the training arm of the organization. However, we felt this “school” could house other sessions as well as ours, led by other leaders, not just those we accredited. In the future, all those who wanted to help others live more harmoniously and joyously with the planet, while emphasizing processes not pieces, activity over words, and both immersion and contemplation, could apply to have a course they created listed on our website.

Three Trunks for One Tree 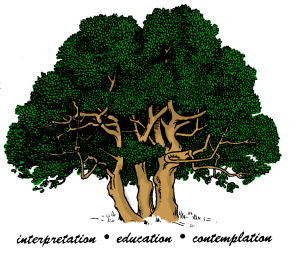 In the first decade of this century, the institute decided to refocus its overall efforts and grow a couple of new trunks on its structural tree. It became clear that the organization could not service a broad-based membership while continuing the program development work it was founded upon. The institute’s programs and materials appealed primarily to the practitioners in the field, and they had little energy left over to support a larger international effort. The educational establishment was simply not interested in a serious educational response to the planet’s environmental problems, preferring the “infusion” model whereby classroom teachers were supposed to insert environmental messages and perspectives into all their subjects. Simply put, that strategy was never implemented on any significant scale, and the studies indicated it was not working, but the field clung to it for dear life. Meanwhile, the tide of young, committed people entering the field retreated, as they were faced with few career prospects in an entrenched profession devoted to educational potpourri.   In addition, corporations had been quick to adopt “green-washing” strategies, and government agencies were equally adept at conveying their management messages as environmental solutions. The well-intentioned practitioners lined up at their troughs. The institute faced a choice: it could either drop its mission of crafting focused, sequential, cumulative, and adventuresome experiences designed for specific learning outcomes, or it could begin pumping out collections of random, soporific activities itself and line up at the financial trough like everyone else.

Environmental education had taken the easy route of producing supplemental collections of random activities, and urging teachers and leaders to do anything they wanted with them. Most took the field at its word … and did nothing. We chose a different path. Instead of trying to serve a broad membership, with all the accoutrements that requires, we would become a small band of committed Associates who were engaged in actually doing the work around the world, and invite other supportive individuals and groups to become Affiliates. At the same time, we wanted to consolidate various parts of our work, some of which had grown up as supplements to our programs, but ended up taking on a life of their own. Out of this analysis, we decided there should be three trunks to our structural tree representing the three areas we had been working in over the decades: interpretation, education, contemplation. When we looked back over the half-century that had gone into the work, these catalytic points were always present in some form as we labored to provide structure for a field that seemed to revel in its lack of it. 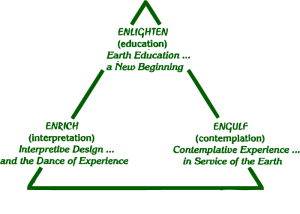 Today, the institute is made up of an international band of professionals dedicated to transforming our relationship with the planet. Its Associates include a range of leaders and practitioners pursuing this goal at some level in their own settings and situations. As volunteers in the institute’s network, they facilitate and represent its work in many ways around the world.

A Personal Letter from the Founder: Why Earth Education?

2017 “Cultivating for the Resurrection”

2015 “Musing On Themes as Design Poison”