(We encourage  visitors to express their feelings about Cedar Cove and share them with others. Here is one such result.) 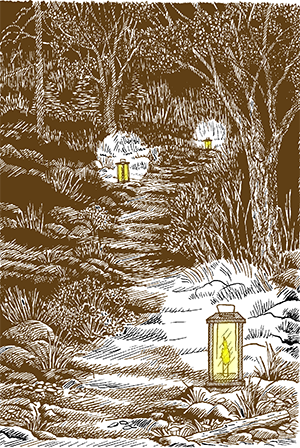 When shadows permeate and fully encompass the day’s light, the air around Cedar Cove not only cools, but also condenses, with the slightest drops of moisture. During morning and afternoon hours, lungs are filled with oven vapors direct from the sun. Come the stars’ time, every breath becomes invigorated with the night dew, while every sound is a prelude to a free, all night performance. As to not miss a beat, it’s time to tap our feet and our ears. Because summer is the insect season, the six-legged symphony is in full acoustic swing by twilight, becoming amplified in the dark. Tonight, we are entertained by two acts performing on the same stage. A large section of musicians are rattling a percussion shaker, and after every third clatter, another species kicks in a monotone buzz. Now, the closest saw player has shimmied up to the microphone, becoming the lead instrument. There is no let up in the rhythm, no pause in the beat. In another part of the kingdom, the chorus rises.   Owls take up the bass melody while a newly arrived coyote pack yips the soprano aria. A deer coughs, yet the band plays on. They don’t know how to stop. On some evenings there appears to be more stars at ground level than in the night sky. Fireflies are winged candles, harbingers of magic. Against a pitch-black canvas, one takes notice of a pixie flare. It is as if someone has turned on the light in an adjacent room, yet you can only see the illumination coming in from under the closed door. You have to see who has turned on the light. Firefly beetles don’t dance alone. Their kind takes notice of courtship by flashlight. It is the thousands of shooting star strobes that constitute the main act of a Cedar Cove’s summer night’s dream. Like the flashes from a hundred old-timey cameras popping simultaneously, a Cedar Cove night may also see the arrival of Thor and his boisterous, white-spitting fires. Thunder and lightning are the synchronized swimmers of the sky. Whatever lightning does, thunder follows. To the lucky viewer, it’s a shower of constant surprises. There may be a single crooked beam or multi-brilliant zaps. When it appears that the flash and clap are miles away, the bolt sneaks up on you, followed immediately by a jolt akin to someone smashing a paper bag next to your ear. The lightning may be dry or may bring a flood to your doorstep. A lightning strike can turn a tree to saw dust, can turn a forest to smoky ash. You won’t see this anywhere else — a sidewalk fashion show, when nobody can see it — in the pitch black. What brings critters out to the concrete gathering place may never be known, but tote a flashlight and a chair and you’ll surely meet a parade of shells, scales, warts and all. The Mayor of Cedar Cove is a pudgy, tangerine-sized amphibian named Cedric. The sidewalk is the toad’s domain. You got to be careful walking the Log House – Garden House trail at night because he hangs out on the sidewalk as part of his rounds. 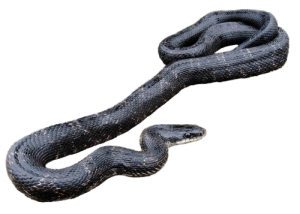 An extended family of black snakes flaunt coats of ebony, which they nonchalantly shed where they wish, over roof eaves, porch supports, even the Log House kitchen floor. Finally, the judge’s favorite is a palm-sized box turtle, who has an unprofessional habit of falling asleep along the path in the middle of the show. Still, the primitive reptile’s startling painted, burnt orange shell almost glows in the dark.  One more thing: the full moon seems larger in West Virginia